Suspend Disbelief – The Minotaur Is Alive and Well

“The Minotaur Takes A Cigarette Break” by Steven Sherrill

I read as much about books as I do the books themselves, it seems. This decidedly quirky book came to me through the Wall St. Journal’s Saturday column “Five Best: A Personal Choice” in which an author reviews five titles in a given category. “Minotaur” was featured in Carol Birch‘s column discussing books “Not About Humans.” And in The Minotaur’s case, not exactly about animals either.

Is this your idea of The Minotaur? Because it was mine:

Theseus and Minotaur, from the bronze in the Corcoran Gallery of Art

Oh, and by the way, while I was reading this book I was out antiquing and looked down at a table only to spy the print above of Theseus and the Minotaur. Funny how things happen like that. Naturally I had to buy it, right? 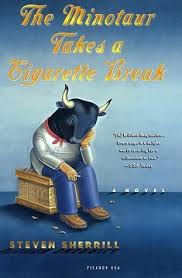 Oh, poor Minotaur. How could I resist reading a book with such an intriguing title and such poignant cover art? Well, I’m awfully glad I didn’t because this book is full of surprises beyond its highly original premise.

We find the Minotaur, or “M” as his co-workers call him, working as a line chef in a North Carolina steakhouse. See, I told you suspension of disbelief was in order here. But once you accept this bizarre concept, the story takes off into a tale of the perpetual outsider possessed of surprisingly tender emotions which render him vulnerable and heartbreakingly human.

The Minotaur is an immortal; he wasn’t slain by Theseus in the labyrinth and although we never learn exactly how, he has managed to survive for 5000 years. He drives a fifteen-year-old Vega which he repairs himself and lives in a trailer park where in addition to his restaurant job, he does odd-jobs including repairing junk cars for the landlord. And he is alone. Very, very alone.

Author Steven Sherrill doesn’t avoid the obvious physical limitations somebody with a bull’s head would have. M has learned to alter his own clothing with needle and thread to accomodate his broad chest. He has a hard time talking because his tongue is so thick.  He desperately wants to express his inner thoughts but can rarely do more than utter an inarticulate “Unnnnh.” He can’t see anything directly in front of him because of his large nose bridge and has to cock his head in order to drive or cook. When first we meet the Minotaur he is sitting outside the restaurant having a smoke; he has just started a kitchen fire because of his blind spot and has gone outside to regroup. And those big cumbersome horns are another navigational problem in the kitchen and elsewhere. You get the picture, right? Nothing’s easy for the Minotaur.

His co-workers are a mixed bag of employees just like you would encounter on the job.  That’s the interesting part of this book; Sherrill plunks this highly improbable character right down into the middle of real life. M gets a salve for his dry skin from a veterinarian, he has a landlord, neighbors, and co-workers and everybody goes about their business pretty much letting him live and let live. They don’t welcome him into their own lives much but they let him have his own.

But M wants more. He hears the married couple next door having sex, he tries to laugh along with his buddies at work when they’re ogling the breasts of a waitress, he yearns to be included but knows he never really will be. And into this mix arrives Kelly, a waitress suffering from epileptic seizures. And M finds himself drawn to this other outsider in a big way. That’s a theme of this book: degrees of differences.

With a setting in a North Carolina trailer park and blue-collar restaurant employees as main characters, you might expect to hear the strains of “Deliverance” banjo music in the background, but Sherrill doesn’t reduce the story to stereotype. The day-to-day prep work in a busy restaurant kitchen is described with respect and careful detail.  I think I could almost carve a rose from an apple after reading the step-by-step instructions. The employees are given a quiet dignity – each relying on the other for a smooth operation. I wonder if Sherrill spent time as a cook because he sure understands the workings behind the scenes. And the denizens of the trailer park are drawn with compassion and complexity also.

I found myself rooting for the Minotaur and his happy ending. But this book doesn’t give you any easy answers. He is, after all, an immortal and whatever happiness he might come across over the long years of his existence is fleeting. He knows that better than anyone. I recommend this book for its poetic language and tender humanity. Here a passage where a little boy spies the Minotaur in the grocery store and his father assures him they will look him up in a book at home:

No one book can fully explain the whys and whats of the Minotaur’s existence. Most of the time the Minotaur is able to forget that his history has been duly chronicled for anyone to see. It has been a long time since his life had any relevance outside his immediate circumstances, and as time passes fewer and fewer people seem to know or care who he is, so he feels cloaked in a tenuous veil of complicated anonymity. Granted, a creature half man and half bull doesn’t go unnoticed doing his laundry, buying groceries or going about the business of living. But there seem to be degrees of difference in the world. If most people knew the truth about his life and the things he has done – no matter that he didn’t have a choice – his life in the here and now would be much more difficult. Thankfully most people don’t know, and while they often replace the truths of his life with rumors and lies, any story they fabricate is okay with the Minotaur. A steady diet of blood and human flesh in the dry black corridors of the labyrinth so long ago thickened his skin. Too, the Minotaur himself is blessed with poor memory.

Life in a 1915 farmhouse in Central Virginia. And the odd thought or two.
View all posts by Silver in the Barn →
This entry was posted in Books and tagged fiction, Steven Sherrill, The Minotaur. Bookmark the permalink.

2 Responses to Suspend Disbelief – The Minotaur Is Alive and Well