Just because I haven’t read an author’s body of work doesn’t mean I don’t have, at a minimum, firm impressions based on nothing more concrete than random reviews or whatever literary scuttlebutt I may have come across. Fair or not, I have to start somewhere.

One of the authors that I have always, somewhat in the abstract, had warm feelings for is Eudora Welty. Out of everything she wrote, I’ve read just one short story: “A Worn Path.” So it wasn’t my vast exposure to her writing that did the trick. There was just so much more to her…

Miss Eudora was a photographer extraordinaire; during the ’20s and ’30s, her particular focus was the black people of her native Mississippi. She had tremendous feeling for her subjects capturing them as genuine human beings in real life moments with special attention given to mothers and children. 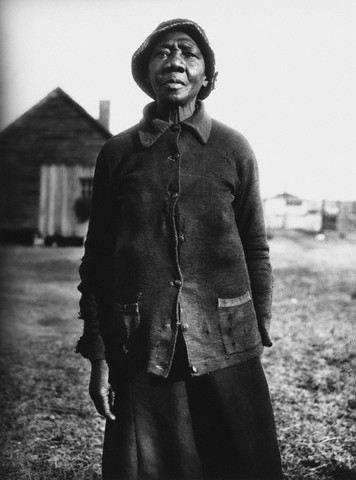 Perhaps the inspiration for Phoenix Jackson in “The Worn Path?”

And Miss Eudora gardened. Passionately and exuberantly. She wrote about her love of gardening with such heart and soul that it’s impossible not to feel a strong connection to her, gardener or no.

“Gardening is akin to writing stories. No experience could have taught me more about grief or flowers, about achieving survival by going, your fingers in the ground, the limit of physical exhaustion.”

She wasn’t pretty. Some even called her “ugly.” Oh, the kiss of death for a Southern belle in her time. What must it have been like to realize that to some extent her life was going to be formed by a genetic misfortune? Listen to some of these quotes from “A Writer’s Life” by Ann Waldron:

“The thing you have to understand about Eudora is that she was not a belle,” said a man a few years younger than Eudora who grew up in Jackson. “She was not pretty, and that is very important.”

“It wasn’t that Eudora was plain,” said a woman who had grown up in Jackson and now lives in Boston. “She was ugly to the point of being grotesque. In the South, that was tantamount to being an old maid. You could either teach school, be a librarian, or teach music, or, if you were far out, teach dancing. That’s the way life was then.” She added, not especially warmly, “At least Eudora found her feet.”

Eudora was elected “Best All Round Girl” by the members of her senior class in high school–a title not given to an unpopular girl. In fact, all her life most people who met her would say something like this: “The first time I saw her, I thought she was the ugliest person I’d ever seen. Five minutes after I started talking to her, I thought she was the most wonderful person I’d ever known.” Her looks mattered to people who were not close to her. People who knew her, even in high school, liked her and forgot her looks.

How often has it happened to you that as you get to know somebody their looks suddenly morph into a reflection of their personalities? Or become completely irrelevant because they are such a joy to know?

Yes, Eudora has a firm place on the long list of authors I need to explore more deeply. But it wasn’t until reading this letter that I suddenly felt real affection for her. Oh, Eudora, on top of everything else, you were funny. Charmingly, wickedly, pun-drippingly funny. You made me laugh and want to be your best friend.

March 15, 1933Gentlemen,I suppose you’d be more interested in even a sleight-o’-hand trick than you’d be in an application for a position with your magazine, but as usual you can’t have the thing you want most.I am 23 years old, six weeks on the loose in N.Y. However, I was a New Yorker for a whole year in 1930-31 while attending advertising classes in Columbia’s School of Business. Actually I am a southerner, from Mississippi, the nation’s most backward state. Ramifications include Walter H. Page, who, unluckily for me, is no longer connected with Doubleday-Page, which is no longer Doubleday-Page, even. I have a B.A. (’29) from the University of Wisconsin, where I majored in English without a care in the world. For the last eighteen months I was languishing in my own office in a radio station in Jackson, Miss., writing continuities, dramas, mule feed advertisements, santa claus talks, and life insurance playlets; now I have given that up.As to what I might do for you — I have seen an untoward amount of picture galleries and 15¢ movies lately, and could review them with my old prosperous detachment, I think; in fact, I recently coined a general word for Matisse’s pictures after seeing his latest at the Marie Harriman: concubineapple. That shows you how my mind works — quick, and away from the point. I read simply voraciously, and can drum up an opinion afterwards.Since I have bought an India print, and a large number of phonograph records from a Mr. Nussbaum who picks them up, and a Cezanne Bathers one inch long (that shows you I read e. e. cummings I hope), I am anxious to have an apartment, not to mention a small portable phonograph. How I would like to work for you! A little paragraph each morning — a little paragraph each night, if you can’t hire me from daylight to dark, although I would work like a slave. I can also draw like Mr. Thurber, in case he goes off the deep end. I have studied flower painting.There is no telling where I may apply, if you turn me down; I realize this will not phase you, but consider my other alternative: the U of N.C. offers for $12.00 to let me dance in Vachel Lindsay’s Congo. I congo on. I rest my case, repeating that I am a hard worker.Truly yours, Eudora Welty

Unfathomably, she was not hired on the spot. I’ve looked through Matisse’s images on-line to find the painting that might have inspired her brilliant “concubineapple.” Guess what? Matisse painted a lot of pineapples. And concubines. But I can’t find where the two might have met. If anybody knows just which painting it was, I’d love to know:

And thanks for reading,

Life in a 1915 farmhouse in Central Virginia. And the odd thought or two.
View all posts by Silver in the Barn →
This entry was posted in Books and tagged eudora welty, fiction, Matisse, nonfiction, Old South, puns, vintage photos. Bookmark the permalink.